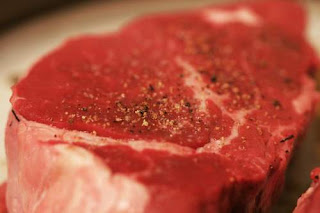 The short article below is a research study done on those who consumed fatty meats and dairy products. This does not mean that you should avoid red meat and dairy all together, just remember to eat all things in moderation.

Red Meat Causes Pancreatic Cancer
By: Elizabeth Somer, M.A. , R.D.
"The saturated fat in red meat and fatty dairy products might increase a person's fisk for developing pancreatic cancer, according to researchers at the National Cancer Institutes of Health in Bethesda, MD. Dietary intakes of more than half a million people were compared to pancreatic incidence during the subsequent six year follow-up. Results showed that men who consumed the most fat from meat and dairy hda a 53% increased risk, while women had a 23% increased risk compared to people wo consumed little of no fatty meat or dairy."
In Perspective: A diet high in meat and fatty diary foods also is linked to other canceres, such as breast and colon cancers. Pancreatic cancer is the fourth leading cause of cancer deaths in the United States. Other risk factors for this deadly disease include being overweight, smoking, and diabetes.
Posted by Cathryn Powell at 10:01 AM