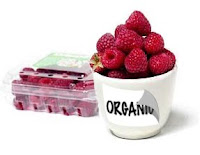 Many folks are not going to be pleased with the findings of a recent study from London School of Hygiene & Tropical Medicine. Consumers are demanding more foods be organic, but information is lacking on whether or not these foods are more nutritious. This study assessed the differences in reported nutrient contents between organic and conventional food products by conducting an in-depth review of the published literature. From a total of 52,471 articles, 162 studies were identified as well-designed and accurate. Results from those studies showed that conventional foods had a higher nitrogen content, while organic
crops had more phosphorus and were more acidic. There was no evidence that foods grown or raised organically, including both plants and animals, were any different nutritionally than similar crops and animals raised by conventional methods. The researchers conclude that “...there is no evidence of a difference in nutrient quality between organically and conventionally produced foodstuffs. The small differences in nutrient content detected are ...mostly related to differences in production methods.”

Picture Found at: joearay2.tripod.com/foodandtravel.htm
Posted by Cathryn Powell at 8:40 AM