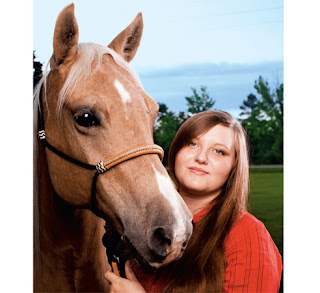 Horse Sense
Since she was a little girl, Chloe-Jeane Wendell has had a special rapport with animals. But in the two years since her family brought Sunny Boy home to their farm in Vivian, Louisiana, the 16-year-old high school junior has bonded more closely with her palomino quarter horse than anyone expected. Hit, possibly, as a colt years before, Sunny Boy was spooked by almost any human contact. "No one could catch him," says Chloe-Jeane's dad, Mark, "but my daughter had an immediate calming effect on him that allowed her to saddle him up for a ride." Sunny Boy and Chloe-Jeane quickly became inseparable. "He's a sweet guy," she says affectionately.

See a slideshow of all five hero pets

At the local Redbud Festival parade in March 2008, the whole Wendell family—Mark and wife Bobbi Jo, Chloe-Jeane, and her younger sister, Kristen, 15—decked themselves out in Western gear and trotted on their horses behind the Vivian sheriff's contingent. Chloe-Jeane rode Sunny Boy; Kristen was on her filly, Angel. A few blocks into the parade, a 75-pound pit bull shot out of the crowd right at Angel and began to attack her. When Angel kicked back, Kristen jumped off to avoid being thrown. The snarling dog then turned on the girl. Chloe-Jeane dismounted to protect her sister. "We watched in horror," recalls Mark.

When Chloe-Jeane let go of the reins, Sunny Boy started, as if to run off. But as the pit bull whipped around to pounce on Chloe-Jeane, all 1,200 pounds of Sunny Boy stopped short and jumped between them. He astonished everyone by squaring off and kicking the dog hard in the face. "I was shocked," says Chloe-Jeane. "Usually, he avoids other animals."

The tenacious dog flipped around and began tearing gashes in the legs of Mark's horse. Animal control officials moved in and finally captured the dog, which was later euthanized.

Chloe-Jeane's friends clustered around her, saying, "Your horse saved you!" Indeed, the behavior was highly unusual. "I've been around horses all my life and have not seen one take on another animal like that," says Mark.

That night, Chloe-Jeane visited Sunny Boy out in the pasture. "I gave him treats and told him how thankful I was that he protected me. I think he already knew how I felt."

Sunny Boy will likely remain a hero, as the Wendells plan to have him participate in an equine-assisted therapy program for troubled youths.

Read more at: http://www.rd.com/your-america-inspiring-people-and-stories/hero-pet-of-the-year/article149998.html
Posted by Shiara at 6:35 PM