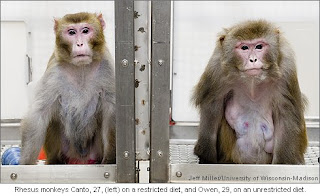 "This is the largest and most highly controlled study showing the beneficial effects of calorie restriction on disease and survival in a primate species," study author Ricki J. Colman, PhD, of the Wisconsin National Primate Research Center, tells WebMD. "We believe that what works in primates will work in humans because primates are so closely related to humans. This has allowed us to understand the mechanisms of the aging process."
The message for all human adults, and especially for younger people, is to reduce caloric intake permanently and you'll likely "experience the same benefits," Colman tells WebMD.
Calorie-Restricted Diet Increases Survival
The research started with 30 rhesus macaques in 1989 to chart the health effects of a calorie-restricted diet and expanded in 1994 with the addition of 46 more.
All of the animals were enrolled as adults, at ages from 7 to 14. The researchers write that of the original 76 animals in the study, 37% of the control monkeys died of age-related causes, compared to only 13% on a calorie-restricted diet.
Rhesus macaques have an average life span of 27 years in captivity, and the oldest one still in the study is 29.
Looking at overall animal health, the calorie-restricted diet leads to longer life span and improved quality of life in old age, Richard Weindruch, PhD, a professor of medicine at the University of Wisconsin-Madison School of Medicine and Public Health and co-author of the study, says in a news release.
"There is a major effect of caloric restriction in increasing survival if you look at deaths due to the diseases of aging," he says.
According to the study, the incidence of cancerous tumors and cardiovascular disease in the monkeys on a restricted diet was half that seen in the animals that were allowed to eat freely.
Although diabetes or prediabetes was seen in 42% of the monkeys that could eat all they want, it has yet to be seen in any animal on the calorie-restricted diet, the researchers say, adding that they consider this result remarkable.
"So far, we've seen the complete prevention of diabetes," Weindruch says.
Calorie-Restricted Diet Preserves Brain
Sterling Johnson, a neuroscientist and one of the researchers, says the brain health of the monkeys on a calorie-restricted diet also is better.
Calorie-Restricted Diet Preserves Brain continued...
"It seems to preserve the volume of the brain in some regions," he says in the news release. "It's not a global effect, but the findings are helping us understand if this dietary treatment is having any effect on the loss of neurons" in aging.
The study shows that the regions of the brain responsible for short-term memory and problem solving are better preserved in monkeys that ate fewer calories.
"Both motor speed and mental speed slow down with aging," Johnson says. "Those are the areas which we found to be better preserved. We can't yet make the claim that a difference in diet is associated with functional change because those studies are still ongoing. What we know so far is that there are regional differences in brain mass that appear to be related to diet."
Similar results have been shown in studies on fish, mice, spiders, worms, and rodents, Weindruch notes.
Calorie-Restricted Diet Better Than Drugs?
Weindruch says the researchers have shown that caloric restriction can slow the aging process in a primate species.
"We observed that caloric restriction reduced the risk of developing an age-related disease by a factor of three and increased survival," Weindruch says.
Samuel Klein, MD, director of the Center for Human Nutrition at Washington University School of Medicine in St. Louis, who was asked by WebMD to review the study, described the study’s findings as "remarkably positive" and "very good news."
The study shows that "caloric restriction is more potentially beneficial than any pharmacologic benefit," Klein tells WebMD. "This may be better than any kinds of medications in the toolbox."
He says he’s "very impressed" that the study showed that caloric restriction reduced brain atrophy (brain shrinkage) in monkeys that were studied. Such studies can't be done in humans for ethical reasons, "so this is getting as close as you can get to that," Klein says.
Calorie-Restricted Diet in Humans
Lary Walker, PhD, a research scientist at the Yerkes National Primate Research Center at Emory University, tells WebMD caloric-restriction studies have been done on small numbers of human volunteers, and fewer signs of cardiovascular aging were noted.
More research needs to be done, Walker says, especially to determine if the lack of brain shrinkage among monkeys fed calorie-restricted diets may shed light on dementia.
"The study is really nice, intriguing, and I would like to know more," Walker says
Posted by Cathryn Powell at 2:11 PM