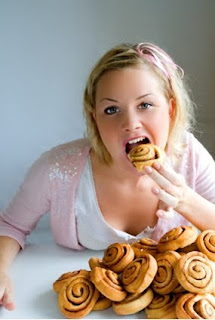 1. A friend gives you a small box of exquisite chocolates. You count them and think, I can make these last for two weeks if I have one a day. Then you:

* a. Set aside a few minutes every evening to sit in your favorite chair and enjoy one piece of  chocolate. It's a great two weeks.
* b. Eat one, then later in the day, another couple. The box lasts a week.
* c. Have one, then another...whoops, it's 10 minutes later and they're gone.

2. At the last big cookout, your hosts served all kinds of salty goodness in great big salad bowls. You:

* a. Scooped some guacamole onto a plate, counted out 15 chips, and really enjoyed them.
* b. Realized, after your third handful, that you'd put away so many calories you were already into the next day's allotment, so you got yourself a glass of diet soda.
* c. Were so engrossed in conversation, you're really not sure how many you ate.

3. You're at the mall, where the air is infused with the scent of baking cinnamon buns. You're finding it very hard to resist, so you:

* a. Enjoy the smell, but hurry on to the kitchenware store.
* b. Buy one, cut it in half, and share with your shopping companion (or, if you're alone, save it for breakfast the next morning).
* c. Buy one and try to eat half, but before you've reached the kids' clothing outlet, you've eaten the whole thing.

4. You ordered a salad with grilled chicken and your friends are splitting a pizza, which looks and smells delicious. You:


* a. Enjoy your salad but ask for a few more Parmesan shavings to feed your cheese craving.

* b. Pick at the half slice your friends left.
* c. Order a slice for yourself.

5. It's been a busy week. On Friday afternoon, you're exhausted, so you:

* a. Take a brisk walk or meditate for about 10 minutes.
* b. Head down to the kitchen, cafeteria, or vending machines for a cup of coffee and some crackers and cheese.
* c. Buy a chocolate bar and eat it.

6. There's a slab of coconut layer cake in the fridge from yesterday's birthday party. You are:


* a. So busy you've completely forgotten it's there.

* b. Aware you're thinking too much about it, so you get engrossed in mah-jongg on the computer.
* c. So totally obsessed with the thought of it, you cut yourself a slice.

If Your Answers Were Mostly A's: You have it under control. You can safely sample $60-a-pound chocolates and still lose weight. But if you occasionally need help resisting temptation, check out the "Give In" tips.


If Your Answers Were Mostly B's: You're clearly not a mindless eater (that's good), but you sometimes bite off more than you should be chewing. You can follow the "Give In" advice unless there are particular foods that call to you. If so, familiarize yourself with the "Give It Up" tips.

If Your Answers Were Mostly C's: You have a tendency to go one truffle over the line, so you need to stick with the "Give It Up" advice until you master the tricks for staying in control.

If You Can Safely Give In...


* Have a little bit of really good stuff. You're more likely to be satisfied with a small amount of the real thing. "Otherwise, what can happen is that you say to yourself, 'I want chocolate, but I don't want the calories,'" says Joan Salge Blake, R.D., associate professor of nutrition at Boston University. "So you start with some cocoa, then go on to other foods that don't satisfy your craving, and you end up having the chocolate anyway."

* Never eat a treat by itself. Feed your yen for chips, but have only a few with a low-fat dip (like hummus or a yogurt-dill mix). Include something healthy and low-calorie, too, like red pepper strips and celery, recommends Susan Roberts, Ph.D., director of the Energy Metabolism Laboratory at Tufts University. Filling out your snack will help you resist downing a bag of chips. And the veggies are full of fiber, which will make you feel full — all for a few calories.

* Go the distance. Don't keep treats in the house. "It's like living in a bakery," says Blake. "You won't be able to resist them." If you really want something special, go to the store and buy a snack-size amount — just one small pack of cookies or chips.

* Clear your palate. Once you've had your little taste, have a drink of water or brush your teeth, suggests weight-loss coach Janice Taylor. "If the taste of that food lingers in your mouth, it will trigger more eating."


* Schedule your delights. Plan your daily menu, and include a couple of 100- to 150-calorie treats. A group of dieters in Roberts's program not only gained more control over their trigger foods doing this, but also lost, on average, 22 pounds in 16 weeks on a 1,400-calorie diet. "Even people who thought they'd never be able to eat chocolate again lost 20 pounds while occasionally indulging," says Roberts.

* Tap your forehead. It may sound woo-woo, but there's science behind this five-second trick to displace your craving thoughts. Since the working memory is small, you can crowd out your food desires by placing the five fingers of one hand on your forehead, spaced slightly apart, and then, at intervals of a second, tapping each finger while looking upward and watching it. You may need to do some reps "until your thoughts go elsewhere," says Roberts.

* Walk for 15 minutes. That's how long it took for a group of 25 chocoholics to exercise off their desire for a chocolate bar. And their resistance was severely tested: In the University of Exeter study, the scientists had teased the subjects with mental challenges (stress triggers cravings) and an actual chocolate bar — which participants had to unwrap.

* Take a whiff of mint. A study at Wheeling Jesuit University in West Virginia found that people who sniffed peppermint periodically throughout the day ate 2,800 fewer calories during the week. "When you focus on the scent, your attention is driven away from cravings," says psychologist Bryan Raudenbush, Ph.D. (Peppermint inhalers are available at sportsinhaler.com and in sporting-goods stores — mint also can improve athletic performance — for about $10.)

* Call a friend. Studies in rats suggest that eating comfort food reduces stress response, which may explain why turmoil sends you to the kitchen for your best friend, cookie. "It does help you temporarily," says diet expert Elizabeth Somer, R.D., "but better to vent with a girlfriend. That always works."


* Be at peace with your cravings. A study done at Drexel University found that people who'd been taught to use techniques similar to mindfulness meditation were better able to resist a treat — in this case, a package of Hershey's Kisses — than those who didn't have the training. Mindfulness teaches that thoughts are just thoughts and don't require any rush to judgment or to action. "If you try to make them go away, all your focus is on the food," says researcher Evan Forman, Ph.D. "But if you just exist with the thought, it loses its power." One way to make that easier: Think about what you want out of life that feeding your craving might deny you. To be fit enough to hike with your kids? Slim enough to wear a slinky red dress to your cousin's wedding? "Identifying what's ultimately important to you will allow that goal to direct your behavior, rather than a food craving," says Forman.

* Never be hungry. That's the other lesson from the Roberts program in which participants lost weight while still enjoying their favorite foods. And it's the one tip that will allow you to go from depriving to indulging yourself — even having chocolate every day if you like — without fear of bingeing. "If you eat the right foods, you won't be hungry," says Roberts. "The people in my program were eating three meals a day with two snacks, and almost 100 percent of them said their cravings weren't bothering them anymore." Won't it feel nice to finally get that Chunky Monkey off your back?